FILING YOUR TAXES LATE IS A BAD IDEA 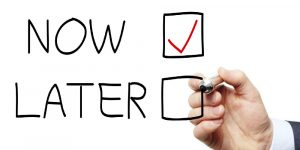 Filing your tax return late is never a good idea. Here’s what you should know about what happens when you file late.

First, let’s clarify that late means you didn’t file not only by April 15th, but by the extension date, which is usually October 15th. If you miss the extension deadline, three things can happen, and none of them are good.

#1 Consequence of Filing your Taxes Late

You’ll likely have to deal with an IRS examiner and that’s never a good thing. The IRS will notice right away that you didn’t file your taxes and they’ll want to know why.

They’ll likely send you a letter stating that you must gather your tax records and meet with an IRS examiner about the situation.

You might also increase your chances of getting audited because not filing your taxes is a big red flag and if they were already considering auditing you, it’s like a fast-pass into an audit.

The IRS doesn’t come down lightly with its fees. They charge 5% a month when you file late. While there’s a maximum of 25% of the tax-due, it’s still a lot of money. Why pay the IRS more than necessary when you could just file on time?

As if the failure to file penalty wasn’t enough, you’ll also pay a failure to pay penalty which is 0.5% a month. Again, this fee can’t exceed 25% of the tax due, but still, you’re paying more than necessary.

If you’re worried about these things happening to you, let’s talk.

Employee or Contractor – What if you Misclassified?

Image from www.troutcpa.com If you own a business, you likely have people working for you. Whether t

What a Business Owner Needs to Know about Cashflow

Image from https://agicap.com   Let’s face it, you can’t run a business without cash flow,

In-House or Outsourced Accountant – Which is Better?

Read more
We use cookies on our website to give you the most relevant experience by remembering your preferences and repeat visits. By clicking “Accept All”, you consent to the use of ALL the cookies. However, you may visit "Cookie Settings" to provide a controlled consent.
Cookie SettingsAccept All
Manage consent

This website uses cookies to improve your experience while you navigate through the website. Out of these, the cookies that are categorized as necessary are stored on your browser as they are essential for the working of basic functionalities of the website. We also use third-party cookies that help us analyze and understand how you use this website. These cookies will be stored in your browser only with your consent. You also have the option to opt-out of these cookies. But opting out of some of these cookies may affect your browsing experience.
Necessary Always Enabled
Necessary cookies are absolutely essential for the website to function properly. These cookies ensure basic functionalities and security features of the website, anonymously.
Functional
Functional cookies help to perform certain functionalities like sharing the content of the website on social media platforms, collect feedbacks, and other third-party features.
Performance
Performance cookies are used to understand and analyze the key performance indexes of the website which helps in delivering a better user experience for the visitors.
Analytics
Analytical cookies are used to understand how visitors interact with the website. These cookies help provide information on metrics the number of visitors, bounce rate, traffic source, etc.
Advertisement
Advertisement cookies are used to provide visitors with relevant ads and marketing campaigns. These cookies track visitors across websites and collect information to provide customized ads.
Others
Other uncategorized cookies are those that are being analyzed and have not been classified into a category as yet.
SAVE & ACCEPT